This weekend The Freak and Unique Geek were given the opportunity to cover their first event as members of the press. Springfest 2013 had its highs and lows, with some glimmering moments of excellence among the general con chaos. 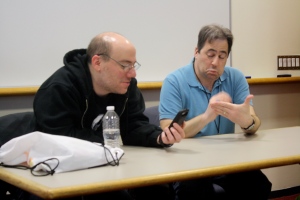 We arrived in the early afternoon on Saturday, the first item on our itinerary was a visit to the “Press Room” for what we could only assume was perhaps an orientation and/or a mixer. We were not informed that this would be a Q&A session with voice actors Mike Pollock (best known as the current voice of Dr. Eggman in the Sonic The Hedgehog series) and Bill Rogers (best known as the current voice of Brock on Pokemon). Perhaps it was a newbie mistake, but I would expect the organizers of a press room to inform the press that they’ll be interviewing someone and who it is that they’ll be interviewing. We were both, thankfully, at least somewhat familiar with their work so we could add to the conversation rather than drag it down. Both actors were incredibly polite and funny. Audio and video from the Press Room will be found at NerdGig.com and LeetNeet.com (recorded by SolidX) later in the week.

Yeah, that’s a guy actually just taking a nap in the back there.

After our extreme Brunch cravings were put to rest, we decided to kill a little time in the Dealer’s Room. It was filled with  exactly what you would expect; prints, buttons, lolita gear, the comfiest chairs I have ever had the fortune to sit upon, miscellaneous manga. Oh, what’s that you say? You want to hear more about the chairs? You could own only these and Ikea Lack tables and be completely satisfied with your life choices. It seems like I’m exaggerating but I’m really not, check them out.

Other than the chairs, there were some genuinely excellent vendors.  We purchased some adorable rings on Sunday from Mayuiki, and we both openly gawked at Karlen Tam‘s art. There were also some very tempting buttons relating to any and all fandoms, and a large selection of sonic screwdrivers that threatened to empty my wallet. The Dealer’s Room, though small, provided something for everyone which was definitely appreciated.

The Cosplay Contest/Masquerade was next on our list, and a major attraction for everyone at the convention. The contest was held together brilliantly by the very funny and very quick on his feet Uncle Yo. He managed to kill time, cover technical issues, calm the crowd, and enhance the performances of the cosplayers. If you need an MC at any fandom-y event, do yourself a favor and give Uncle Yo a call. The staff seemed a bit overwhelmed with the technical aspects of the contest. They also could have used a sound check and a quick run through of the sound cues before allowing people in. It was scattered, and a little awkward at times.

Your new overlord, kneel before him.

Then came the highlight of the convention. An adorable 3 year old, hereafter referred to as Stormageddon, Dark Lord of All, rushed the stage. Stormy was, of course, interrupting a special musical performance that was suffering from some severe audio problems at the time (so the crowd was totally ready to cheer on the chaos). He proceeded to lure in Elderberry with his adorable little face and walk off with one mic and then somehow acquire the second one AFTER he’d already proven himself untrustworthy.

Don’t worry, it continued to fall apart after Stormageddon had officially won control over all of the microphones and hearts in the theatre. It seems everyone in the booth wasn’t entirely sure about what was happening, and a staffer rushed down (I’m so sorry you had this task SolidX, but you handled it in the funniest way possible). He saw the crisis unfolding before him and said into his walkie talkie with a terrible, disbelieving look on his face…

“We have a situation… it’s complicated.”

We then proceeded to drop all professional pretenses and lose our minds while we watched four adults attempt to corral and bargain with their new master Stormageddon before someone finally had the sense to jump up and just take the microphones away from him. Stormy was then reunited with his Mother, and given a hearty round of applause as he exited the theatre. We decided that there was nothing that could really top that experience and headed home for the day. 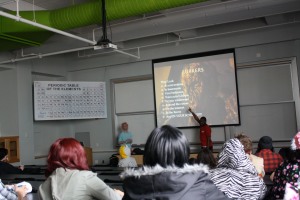 Sunday dawned bright and early with a panel called “How to Avoid Fangirls, Fanboys, the Overrated”, and I was prepared to feel defensive (as fan status has become a very contentious subject in the Sherlock Holmes fandom as of late) but was surprised with a funny, if chaotic panel addressing the serious subject of proper con etiquette. Those in charge of the panel needed to exert a little more authority over the room, and some of those in attendance needed to take a lesson from the panel, but it was a grand experience.

Then, after brunch and a second trip to the Dealer’s Room, we attended the CosplayNYC Magazine panel. It was well put together in theory, but a troll wandered into the dungeon and proceeded to dismantle the presentation by asking nonsensical questions that the panelists answered when they should have ignored. The magazine itself seems to be a very useful tool for anyone looking to research specific conventions to see if it would be worth the cost of a ticket, build a simple piece for a costume, or just keep up with the New York Cosplay community.

Overall the experience felt rather akin to a middle school dance. You know someone’s in charge, but it just kind of seems like they’re not actually there and everyone’s wearing funny clothes and constantly adjusting themselves and fixing their makeup and taking group pictures and screaming but no one knows what’s going on or what there is to do other than adjust themselves and take pictures and scream. It needed work organizationally, and though I understand it’s no small task to corral insanity, there were steps that could have been taken to improve the experience. The panels could have used more rehearsal and the volunteers could have used more information about the venue and event, the press could have been given a more detailed schedule of events, the events themselves could have been held in a smaller area. We won’t say we’re never going to attend again, ever, but SpringFest is not an absolute must-see event. We’d like to see it improve and grow for next year.

This fem!Cas made our hearts pop out of our chests… quite literally. Cosplayer: Ali Chimelis – princessrats.tumblr.com

Master Chief cosplay we are extremely impressed by~

An adorable Pikachu. WHY YOU SO CUTE PIKACHU

The adorable Pikachu has a sister – an adorable Hatsune Miku!!

This outfit by Aoi Ichinose blew our minds.

Look, she has SPARKLES in her eyelashes! FLAWLESS.

Check out the 3 Chic Geeks Facebook for behind-the-scenes photos of our adventures!

Error: Twitter did not respond. Please wait a few minutes and refresh this page.

What Everyone Is Reading